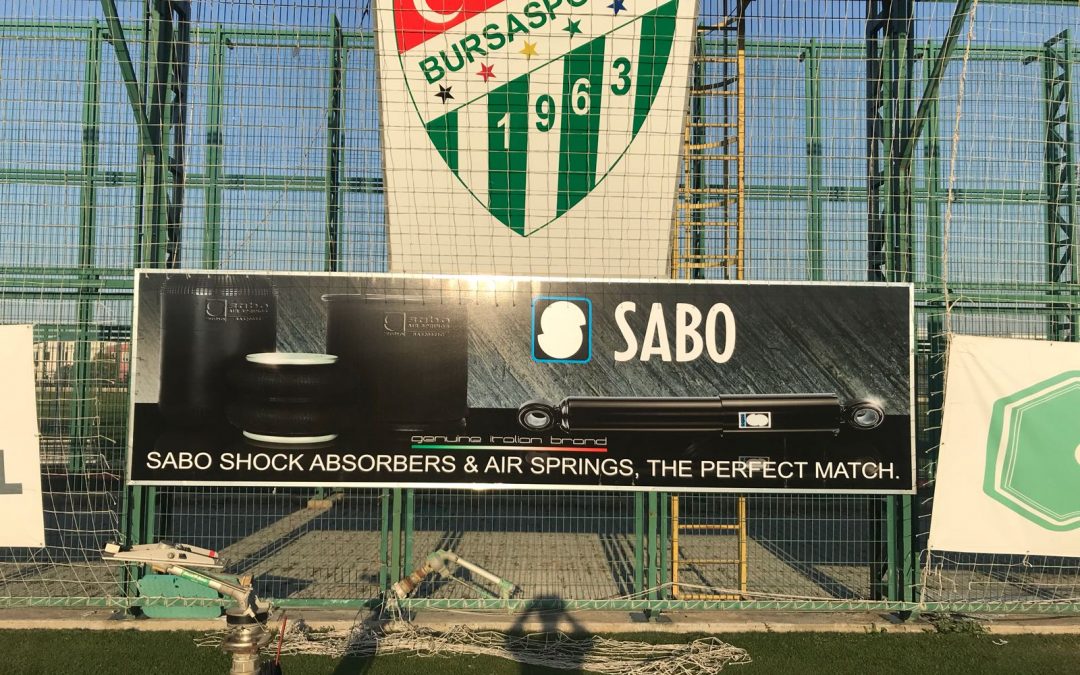 SABO has become the sponsor of the Bursaspor football team, which militates in the Turkish Super Lig, the Equivalent of the Italian Serie A. Bursaspor is currently in eighth position.

The club was founded on 1 June 1963 after Acar Idman Yurdu, Akinspor, Istiklal, Pinarspor and Çelikspor were merged to form a single club; Bursaspor. Green and white were chosen as the club colours, and the club entered the 2. Lig in 1963–64. Their first match took place on 21 September 1963 against Izmir Demirspor in Izmir. Bursaspor were promoted to the Süper Lig after winning the 1966–67 2. Lig. They won 19 of their 30 matches, finishing with 45 points, eight ahead of second placed Samsunspor. They were relegated to the 2. Lig in 1985–86 and were relegated again in 1986–87 season, but their relegations were revoked due to winning the Turkish Cup in 1986 and a Turkish Council of State verdict in 1987.[citation needed] Their most recent relegation came in 2004. They gained promotion back into the Süper Lig after winning the First League on 16 May 2006. Bursaspor won their first major cup in 1971, beating Fenerbahçe 1–0 after extra time in the now-defunct Presidential Cup. Because Fenerbahçe had won the league and cup in 1973–74, Bursaspor, as 1974 Turkish Cup runners up, were given a place in the 1974-75 European Cup Winners’ Cup. Bursaspor reached the quarter-finals, beating Finn Harps and Dundee United, before falling to eventual champions Dynamo Kyiv. The club’s first Turkish Cup win came in 1986 when they defeated Altay 2–0 in the finals. The club therefore qualified for the 1986–87 European Cup Winners’ Cup, losing to eventual champions Ajax in the first round.

The 2009–10 season, began successful and by the midpoint of the season, in December 2009; gameweek 17, the club were sitting in the top spot in the Süper Lig table. The first half of the season saw a 1–0 home victory against Istanbul giants Galatasaray, and also a 2–3 win away at Besiktas. In late 2009, Saglam was linked with the vacant Turkey managerial position after Terim’s resignation, but he refused to comment on the speculation. Guus Hiddink eventually took up the position. The latter part of the season saw a 6–0 win over mid–table Istanbul, the largest win in the league to date this season, and also a 2–3 away win against Fenerbahçe after winning from two goals down. Bursaspor again reached the quarter-finals of the Turkish Cup and again they lost on aggregate to Fenerbahçe, this time crashing out 4–3 due to an injury time winner from Fener. In April 2010 Bursaspor sat at the top of the table after being in the top three for the past few months. With eight games left to play Bursaspor were five points clear at the top. Five weeks before the end of the season, Bursaspor fell to second place in the Süper Lig. They maintained pressure on Fenerbahçe who had overtaken them. Going into the final game of the season, Bursaspor were just one point behind Fener, and needed to better their results against defending champions Besiktas. Knowing that the match against Besiktas could prove decisive. With Fenerbahçe held to a 1–1 home draw against Trabzonspor, and Bursaspor beating Besiktas 2–1, the Bursaspor were crowned champions, by just a single point. They are only the second club outside the “Istanbul Big Three”who have won the league. Trabzonspor were the other team, who last won in 1983–84. Before winning its first Süper Lig title in 2009–10, Bursaspor had never finished inside the top three. The club won its first title in Ertugrul Saglam’s first full season as manager of the club. Pablo Batalla and Ozan Ipek were the club’s joint top scorers with eight goals apiece.[9] Bursaspor were drawn against Rangers, Valencia and Manchester United in the group stages of the 2010–11 UEFA Champions League.[10]In its away match against Rangers, Bursaspor decided not to don their home kit to avoid provoking Rangers’ fans, as their kit heavily resembles that of Rangers’ rivals, Celtic.[11] Bursaspor is the fourth football club in Turkey to start a dedicated television channel (Bursaspor TV).